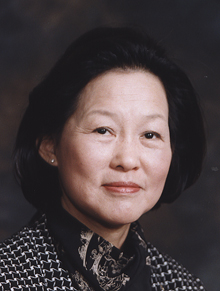 Dr. Huang is Senior Faculty Associate in Biology at the California Institute of Technology. She was previously Professor of Microbiology and Molecular Genetics at Harvard Medical School, and subsequently Dean for Science at New York University. As an administrator Dr. Huang is particularly interested in interdisciplinary research, organization of higher educational and research institutions, and in policy issues related to education, science, and technology. Since coming to California, Dr. Huang has joined the Pacific Council on International Policy and the Blue Ribbon.She currently consults.

Dr. Huang is a distinguished virologist and proponent for women in science. The American Society for Microbiology awarded her the Eli Lilly Award in Immunology and Microbiology (1977) and the Alice C. Evans Award (2001), She was elected President of that society for 1988-1989. She has honorary doctorates of science from Wheaton College, Mt. Holyoke College, and the Medical College of Pennsylvania. She served on the Board of Trustees of the Keystone Center, Health Effects Institute, Keck Graduate Institute, University of Massachusetts, Johns Hopkins University, Public Agenda, the Rockefeller Foundation, Waksman Foundation for Microbiology, and the American Association for the Advancement of Science (AAAS). She is a fellow of the Academia Sinica in Taiwan, American Women in Science, the Academy of Microbiology, and the AAAS. She was elected the President of AAAS for 2010-11.

Her academic career began as the Houghton Assistant Professor of Microbiology and Molecular Genetics at Harvard Medical School. During that time she also served as coordinator of the Virology Unit at the Channing Laboratories of Infectious Diseases at Boston City Hospital and Director of the training program funded by the National Cancer Institute on "Virus-Host Interactions in Cancer." She became full Professor at Harvard in 1979, as well as the Director of the Laboratories of Infectious Diseases at Children's Hospital in Boston. There she established a unit working on viral diseases of pediatric patients under a Geographic Medicine Center Grant from the Rockefeller Foundation. She also initiated an AIDS unit that was part of the NIH pediatric Clinical Trials Group.

As a graduate student she was the first to purify and characterize defective interfering (DI) viral particles. Her postulate that these mutants play a major role in viral pathogenesis stimulated work on many viral systems including plant viruses. Her postdoctoral work at the Salk Institute and MIT with David Baltimore on vesicular stomatitis virus (VSV) uncovered a virion-associated RNA-dependent RNA polymerase that identified a novel replication strategy for the group of Negative Strand viruses and led the way to Baltimore's discovery of reverse transcriptase. Her pioneering research focused on the molecular characterization of VSV: its proteins, viral RNA species, and regulatory mechanisms during replication. Because of her work, VSV has become a model virus for many research studies. She was, also, the first to demonstrate that RNA and DNA enveloped viruses, including retroviruses, VSV, HIV and HSV, phenotypically mix their surface glycoproteins resulting in pseudotypes with alterations of antigenicity and host range.

Subsequently, as Dean at NYU, she spearheaded interdisciplinary programs that resulted in the formation of "Silicon Alley," an entrepreneurial outgrowth from the collaboration of the Courant Institute of Mathematical Sciences, the Tisch School of the Arts, and others from the Faculty of Arts & Sciences.

Born in China, she grew up in the United States attending Episcopal girl's schools and Wellesley College. She received B.A., M.A., and Ph.D. degrees from Johns Hopkins University.

Dr. Huang holds a private pilot certificate. She resides in Pasadena, California, and has one daughter.